Trust as a Precondition for Successful Reforms

Various international studies show that the income level, although important, is not the most important determinant of life satisfaction in a particular society. This rule is applicable only in very poor societies where higher income means meeting basic needs. When society meets a certain minimum – social trust gains advantage in relation to quality of life.

When the level of social trust is low, social capital decreases, cooperation between institutions and organizations is weak, and "non-cooperation may be rational" response of individuals (Rothstein, 2005, p. 12). On the other hand, high level of trust creates "an economic and political environment that is conducive to economic growth" (World Bank, 2013, p.129)

Survey on Income and Living Conditions’ (SILC) data for Serbia provide important information: firstly, the degree of trust in the political and legal system in Serbia is very low and secondly, the degree of trust practically remains the same regardless of changes in personal income (see graph, data RSO, SILC, 2013 author’s calculation). In other words, in Serbia, both rich and poor have low trust in the country’s political and legal system.

Low state legitimacy and low trust in Serbia are a result of weak enforcement of laws and functioning of institutions.  Low trust is particularly pronounced in relation to institutions at the local level, which is also the case in other countries of the Western Balkans region which are in the process of the European Integration. On the other hand, this is in contrast to all EU Member States, where trust in local institutions is higher than in national institutions (Eurofound, 2013, p. 9).

Existence of democratic procedures, certain legislation and institution is not enough. This is the reason why professor Mushtaq Khan from the University of London stresses that a major shortcoming of the global debate on development lies in the fact that, in developing countries, the debate is too focused on strategies to be adopted, while neglecting "governance capabilities appropriate for the effective implementation of these strategies“(Khan, 2008, p. 108).

The authors of Project Europe 2030 note that decision makers often fall into the trap of wide gaps between policies and programmes, on the one hand, and their implementation, on the other, and warn that "when ambitious objectives are pursued with limited resources and weak implementation mechanisms, we have a recipe for disappointment" (European Union, 2010, p. 7).

It is almost impossible to implement reforms in societies dominated by negative expectations and distrust.

The Role of Institutions in Creating Social Cohesion can be found on the link. 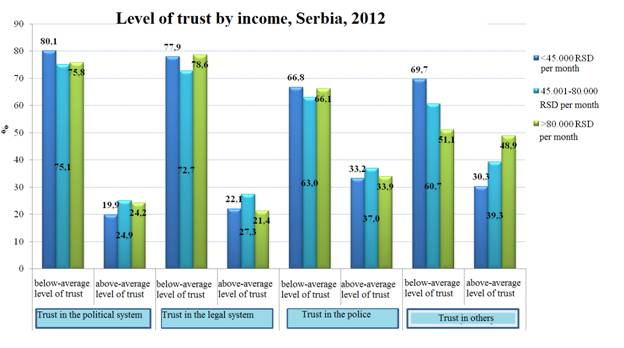